Superstudio: The Architects Who Dreamt of a Future With No Buildings

FLORENCE, Italy — One recent afternoon, the architect Gian Piero Frassinelli, 81, stopped on a walk through a piazza near his home, and pointed at a fresco high above on a building’s facade.

The illustration depicts an entourage of local luminaries, including Dante, the poet, and the painters Leonardo da Vinci and Giotto. Many would view the scene as a tribute to Florence’s historic golden age. For Frassinelli, however, it represents the city’s disrespect for its creative sons.

“Until after their deaths, this city’s artists are destined to be rejected,” he said.

As the last surviving core member of Superstudio, Frassinelli should know. That radical architecture collective galvanized the design world during a MoMA exhibition in 1972, and its futuristic vision zigzagged the globe. Although Superstudio built very few actual buildings, its witty photo collages and designs, presented in exhibitions and glossy magazine spreads, opened up new possibilities for what 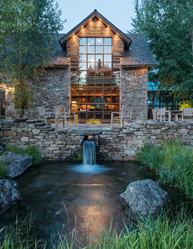 We believe that the most sustainable thing we can do as architects and builders is to construct houses that last a century or more.

With its wide open spaces and restorative connection to nature, the Rocky Mountain West’s appeal is growing with city dwellers interested in staking their claim on the stunning landscape in what one Aspen realtor has called “the great urban exodus.” That influx of interest has turned national design attention to a style known as Mountain Modern – and to top practitioners JLF Architects. While the Bozeman, Montana-based firm resists being pigeon-holed, JLF is an acknowledged pioneer – with over 40 years of experience – of the art