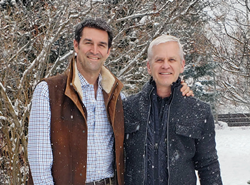 Klaus Baer and Rush Jenkins’ passion for the Mountain West led them to Jackson Hole, where they have grown WRJ Design to a nationally recognized interior design firm.

I saw that we could offer an international perspective that the luxury residential [category] in the Jackson area was missing.

Business of Home, the respected must-read media for interior designers across the U.S., completed its yearlong “50 States Project” in Wyoming, selecting Rush Jenkins and Klaus Baer, co-founders of WRJ Design, to represent the state. In her interview with the duo, BOH Editor in Chief Kaitlin Petersen discusses Jenkins and Baer’s “very different” but entirely complementary skill sets, as well as the growth of WRJ, which moved west from New York, opening its Jackson, Wyoming, showroom as a two-man operation in 2010. Ten years later, fresh off a successful book